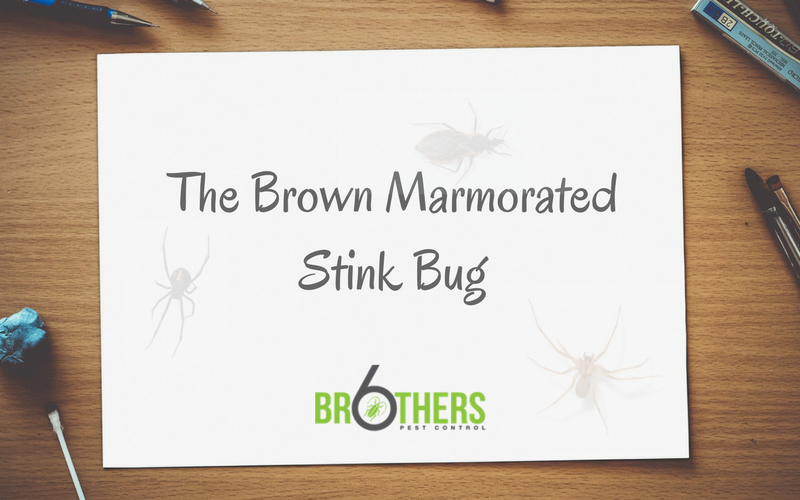 In 1998, the first brown marmorated stink bug was spotted in the United States. Since then, these pests have expanded and multiplied to the point that they are now a major priority to the Department of Agriculture because of their widespread damage to crops. Stink bugs not only cause millions of dollars of damage to plants, but they can also get into people’s homes and become a major nuisance. So, what are brown marmorated stink bugs, and how can they be prevented and controlled? Brown marmorated stink bugs are about ⅔ of an inch long and are the shape of a shield. Marmorated means “having a marbled appearance,” so you can identify them by their brown color with gray, off-white, black, copper, or bluish markings that look marbled. Their stink glands are located on the underside of their thorax between the first and second pair of legs. They can emit a strong odor that smells similar to coriander as a defense mechanism.

These stink bugs are native to China, Japan, and Korea, and were accidentally introduced to the United States. The climate of the U.S. turned out to be perfect for the stink bugs to thrive. Stink bugs pierce plants with their proboscis in order to feed. This creates dimpled or necrotic areas on the plant and causes seed loss and widespread damage. Plants most in danger from stink bugs are peaches, apples, green beans, soybeans, cherries, raspberries, and pears.

As the weather gets cold, stink bugs seek a place to survive the winter, and this often includes houses and other structures. During the Fall, they will cluster by the thousands in areas of warmth. Outside areas may include piles of leaves, firewood stacks, and dead trees. Indoor locations can be attics, basements, behind baseboards, and in storage areas. Once in a home, they go into a state of hibernation known as diapause. They do not feed and remain inactive until Spring. Unfortunately, sometimes a warm spell will be enough to trick the bugs into thinking that it is spring. Homeowners may be surprised and horrified to see stink bugs flying clumsily throughout their homes in the middle of winter. While they don’t cause any danger, their appearance and stinky odor can be a major nuisance.

Prevention is always the best answer. You can prevent a stink bug infestation by carefully sealing the exterior of your home. Any cracks or gaps need to be sealed with caulking or expandable foam. Pay special attention to window and door frames, soffits, and ventilation openings. If your vents are uncovered, you can staple a fine mesh screen over them to keep bugs and other pests out.

If you discover stink bugs in your home, use a vacuum cleaner to suck up the live and dead bugs. When you are done, immediately dump the contents and seal them in a bag before putting them in the trash. Since stink bugs often congregate in large numbers (26,000 stink bugs have been found in one home!), it is likely that there could be a hidden infestation in your walls, attic, or crawl space. Professional pest control companies can perform an inspection and provide treatments to take care of these infestation. Licensed professionals can also pretreat homes in the summer and fall to ensure that you don’t have to worry about the problem again.

Six Brothers Pest Control wants to be your go-to source for all of your Kansas City pest control needs. We are a family owned company that built our business on values of hard work, great customer service, and a satisfaction guarantee. We want to earn your trust. Give us a call today.