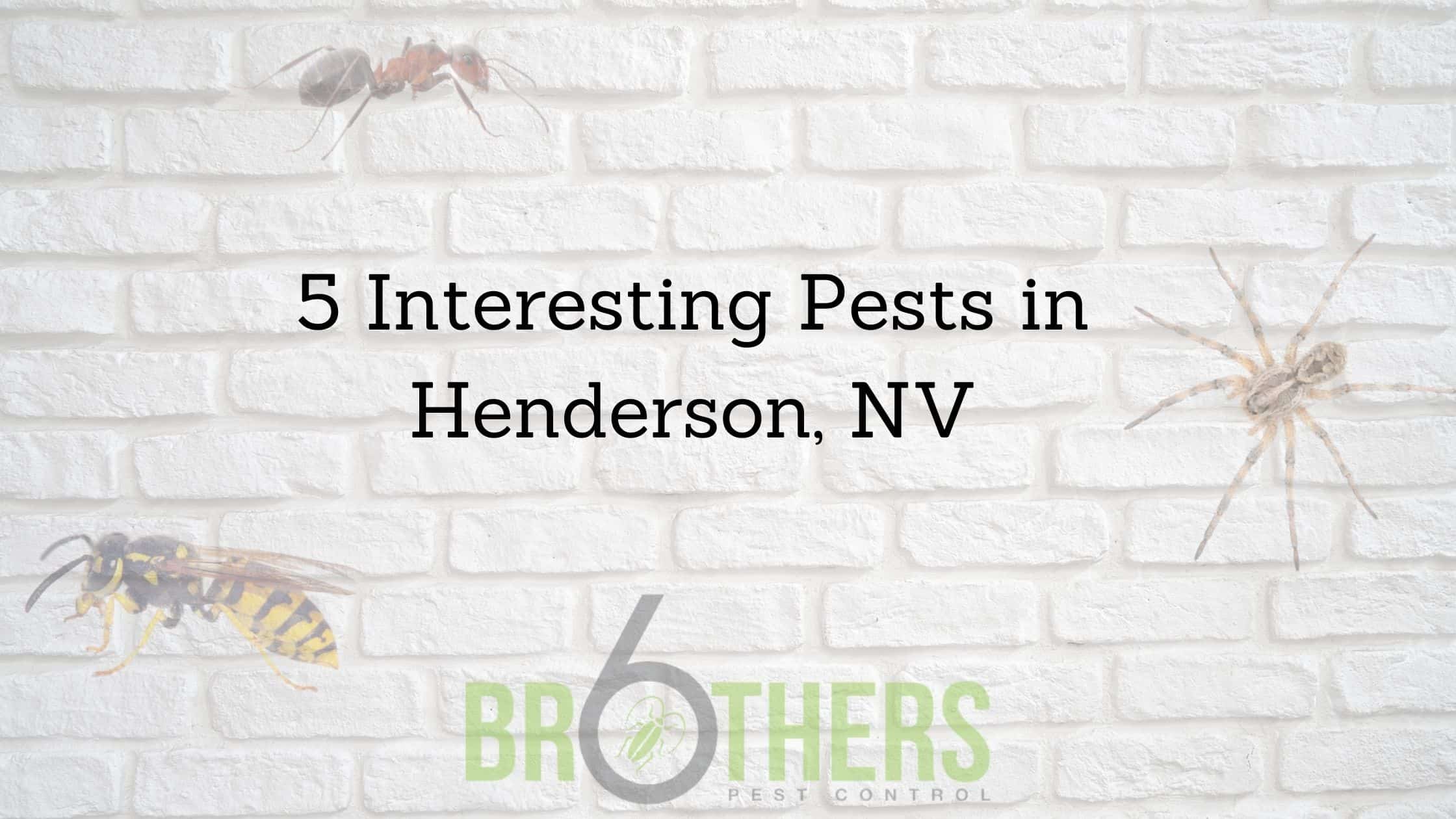 If you are new to living in the Henderson, NV area, you may not be aware of which pests tend to make their home in this state. It is a good idea to learn more about these pests and some of the steps you can take to prevent these pests getting into your home. Some of the pests that you will find near your home in Henderson, NV include:

This is one of the most common pests found in Las Vegas and there are actually four types to consider. These include the German, Oriental, Australian, and American cockroach, with all four being found in Nevada. These pests can be small, ranging in size from 0.1 to 3/2 inches and are often black or brown in color.

It is not uncommon for cockroaches to hide out in places that are dark and damp, especially if they can find food in that area. They also do a good job of living inside the home or outside. This pest will multiply quickly and will be harmful to your health as well.

This is a common rodent found in the Henderson, NV area, even though it is not native to here. It is believed to come to the area on the palm trees that were transported through the area. Roof rats are small rats that are sometimes mistaken for large mice, coming in between 10 to 14 inches and weighing 5 to 6 ounces.

They do well inside and outside and they like to chew through insulation and wires to make their nests so they will cause a good deal of damage. They are also good at multiplying quickly and can have four to six litters per year, up to 48 babies a year. Like other rodents, they will carry and spread diseases in no time.

Another pest in Henderson, NV is the Norway Rat. This is a large rat, sometimes called a super rat because it is so big. These are not found as often as the roof rats, but they are able to cause a lot of trouble because of their size. They do cause a good deal of damage to the home as they build their nests and they will spread germs and bacteria. They can make your home an unsanitary place because they will urinate and leave behind their fecal pellets as well.

You are not able to move to the Nevada area without seeing lots of scorpions around. They are especially common if you live on some land or in the outskirts of town. These pests are going to love to spend their time in darker environments because it allows them to stay hidden, which can be a problem for homeowners. They do not reproduce as fast as other pests, but they are dangerous due to their sting. As soon as you suspect that you have a scorpion around the home, then removal is necessary. Get this done as soon as possible to make sure that you are not stung and hurt by the scorpion.

The fifth type of pest that you may see around your home is the apache cicada. These often live in the trees. They will not infest the home and are not as dangerous as the others, but having a bunch in your trees can get annoying thanks to their clicking and buzzing noise. The noise will get loud the more that they reproduce and have other babies around.

Since these start out as nymphs who live under the ground and will not come out until they are adults, it is hard to know how many are around until they are making a lot of noise. It is best to treat these before they become adults if possible. If you know the area has a lot of the apache cicadas or you have had some troubles with these in the past, then you may want to treat for them each year to be safe.

All of these pests and more are common in the Henderson, NV area. It is a good idea to come up with a treatment plan, or to use a professional pest removal company to help handle the issue. No matter the kind of pest that is around your property, residential or commercial, it is important to take decisive action and take care of the issue as soon as possible. The right prevention will keep your home safe and sanitary for years to come.