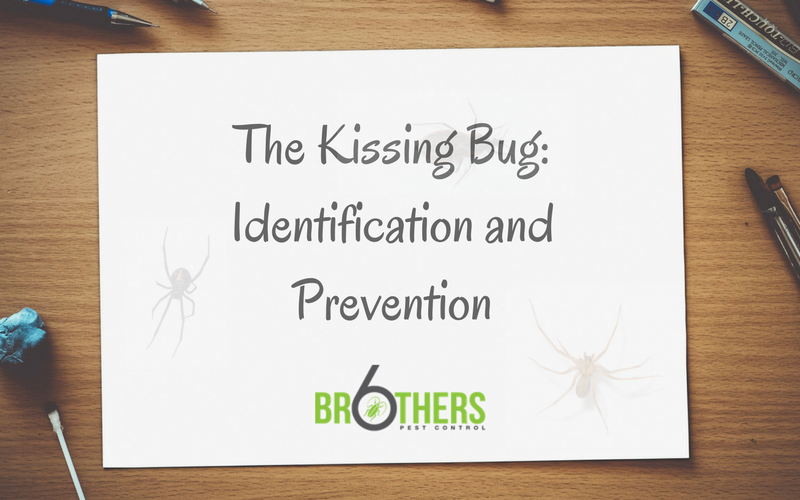 The Kissing Bug: Identification and Prevention

With Valentine’s Day quickly approaching, you may have kissing on your mind. This year while you are smooching your sweetheart, there may be a more sinister kisser around. The kissing bug has made its way north to Kansas and Missouri, and is now one of the dangerous insects to keep an eye out for in our area.

The kissing bug garnered a lot of hype back in 2015 when the CDC issued a warning to 26 states that the kissing bug had been reported within their boundaries. Even after that warning, it seems that very few people have ever heard of this insect or have an understanding of the complications that come with it. Although the kissing bug is still rare, it can spread a serious illness called Chagas disease, so being able to identify and prevent these kissing bugs is an important first step.

The kissing bug is a nickname for the triatomine bug. The triatomine bug is usually smaller than an inch long and looks flat until swelled with blood. It can be dark brown or black with orange or red markings. Another hallmark of this bug is an extended mouth that it uses to feed on the blood of mammals. It was given the nickname of “kissing bug” because it is attracted to warmth and carbon dioxide, so it will often bite on the face, near the lips.

The triatomine bug is often a carrier of a parasite called trypanosoma cruzi that can be found in its excrement. If a bug is infected with this parasite, and the parasite enters the body through mucous membranes or broken skin, Chagas Disease can be a result. Some of the symptoms of Chagas Disease include fever, fatigue, rash, diarrhea, vomiting, heart failure, and intestinal damage. Chagas Disease can lay dormant for years and then suddenly result in severe heart problems. It is believed that there could be up to 300,000 people in the U.S. affected by Chagas Disease, who don’t even know it.

Triatomine bugs tend to live in chicken coops, dog kennels, rodent nests, and other piles of debris. When inside, they are frequently found in cracks, beds, and mattresses. The key to protecting yourself and your family is to keep these bugs from entering your home. This is done by sealing the exterior of your house. All cracks and gaps, including around windows and doors, should be sealed with caulking or foam to ensure that bugs and insects cannot get inside. It is also a good idea to check around your pet’s bedding and clean the area frequently, remove wood, brush, and rocks near your home, and report any sightings of this bug to the CDC.

Triatomine bugs and Chagas disease are not something to stress about, but it is a good idea to understand the risks and know how to prevent them. A great way to help keep kissing bugs and other insects out of your house is regular pest control treatments. These treatments will create a barrier around your home that will keep the insects away. The technicians at Six Brothers Pest Control are your Kansas City pest control experts. Our family owned and operated business puts its customers first and has a 100% satisfaction guarantee to back up our services. Give us a call today.