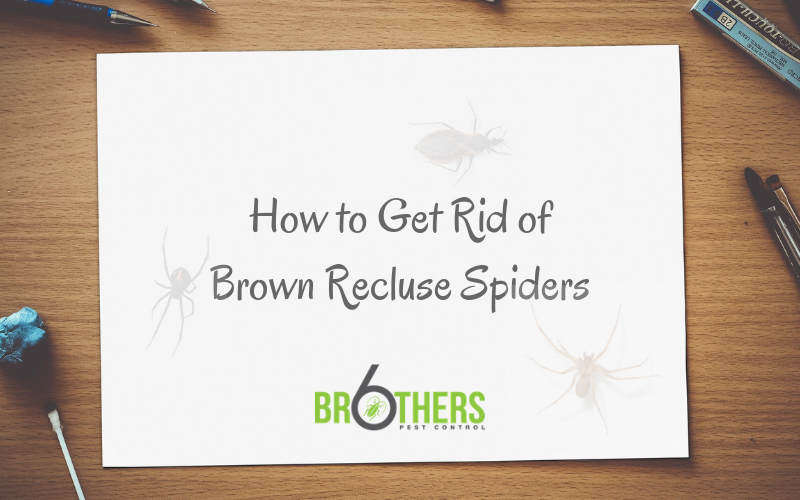 How to get Rid of Brown Recluse Spiders

By Six Brother Pest ControlNovember 13, 2018No Comments
[et_pb_section bb_built=”1″ admin_label=”section” _builder_version=”3.0.47″][et_pb_row admin_label=”row” _builder_version=”3.0.48″ background_size=”initial” background_position=”top_left” background_repeat=”repeat”][et_pb_column type=”4_4″][et_pb_text _builder_version=”3.20.2″ background_size=”initial” background_position=”top_left” background_repeat=”repeat”]
Among the most troublesome household pests in the Southern and Midwestern states is the elusive ‘Brown Recluse Spider’. Sometimes called “reapers,” “fiddle-backs,” or “violin spiders”, the Brown Recluse is typically prevalent in Kansas City, as well as surrounding states like Arkansas, Oklahoma, Texas, among others. You may have seen these spiders around, but not quite known what they are, so we’re going to present you with some facts about the Brown Recluse.
The Brown Recluse is not a naturally aggressive species and they have been even known to live peacefully with humans. But should they be provoked, their bites can cause some serious harm, especially if the victim is an elder or child. A company that does senior home care in Oklahoma City told us that seniors, since their immune systems are sometimes compromised, stand the most at risk.
As the rule goes with spiders, they are likely more afraid of you than you are of them. However they still pose a threat, so just to be on the safe side, it’s better to take steps to control their numbers so it doesn’t escalate into a full-blown infestation. If you suspect you have a Brown Recluse house infestation, don’t worry, we’ve compiled a helpful guide on dealing with these critters.

You don’t have to be an arachnologist to be able to identify a Brown Recluse. The first thing you’ll notice is the color, these spiders are usually light brown or grey in color with long thin legs that stretch out to about the size of a quarter or a bottle-cap.
Their appearance is typically mistaken for the wolf spider, another common household pest with a less harmful bite. A good way of telling them apart is to check if they have this distinct marking. True to their nickname, they have a violin or fiddle-shaped marking that extends across the head. Another way to tell is that, unlike wolf spiders, they don’t have stripes on their legs.

The first step to getting rid of Brown Recluse spiders is to understand their behavior. As their name suggests, these spiders are reclusive. So they tend to make nests in the dark and hidden areas of the house. You’ll likely find them hiding under floorboards, in piles of junk, or even in an old shoe. So make sure you keep these kinds of areas neat and make sure you clean out any cobwebs that appear.
Brown Recluse live all over the Midwest, from Iowa to Texas. In fact, one pest control company in Pearland, TX called Green Country Pest Control says that they get regular calls for them alone, perhaps more than any other arachnid.
The Brown Recluse spider is also nocturnal and will tend to hunt prey at night. Among their prey are silverfish, cockroaches, and crickets. Having any of these other pests will increase the likelihood of a Brown Recluse infestation so it’s important to keep their numbers down as well.

Getting Rid of Brown Recluse Spiders and their Nests

Use Insecticide and Repellents

Liquid and dust insecticides can be used around the house to both repel and kill Brown Recluse spiders. Make sure to cover areas you would normally find them. This includes closets, basements, under and behind large pieces of furniture, and other hard to reach areas.
Brown Recluse spiders are just as likely to make nests outside your house. So you should also take care to cover small gaps between windows, floorboards, vents and walls.
As mentioned before, they also hunt other pests like cockroaches. It helps to use other types of insecticides to target these so that they have less reason to hang around your house.

If it starts to become apparent that home remedies aren’t keeping their numbers down, consider hiring a professional. A trained pest controller will be able to tell you which areas of your house are most likely to harbor Brown Recluse spider nests. Their advanced equipment will also be able to exterminate larger populations in a shorter amount of time.

Make a Habit of Cleaning and Decluttering

Since the Brown Recluse spider likes to hide in hard-to-reach places. It’s important to make sure to regularly clean the more isolated areas of your home. Piles of junk in seldom visited storage rooms, especially, are prime real estate for these pests. Make sure to keep hard to reach areas like space behind and under furniture free of dust too.

As an additional precaution, you can also seal small entries around the house. Weatherstripping the space between windows panels and floorboards will help keep them from entering your home.

As mentioned earlier, the Brown Recluse spider is not typically aggressive. But they do have a venomous bite that has what is called a dermonecrotic agent. This means a bite can damage cells, killing skin tissue and even travel through your bloodstream to destroy red blood cells.

The first signs of a bite are hard to spot because it won’t feel very painful initially. But after 8 to 12 hours, the pain will intensify around the area of the bite.  Within a day or two, you may start to feel nauseous and feverish. Other symptoms also include chills and joint pain. The bite itself will become inflamed and will be painful to the touch.

How to Treat a Brown Recluse Spider Bite

If possible, the first thing you should do is to try and catch the spider that bit you. This might seem counterintuitive but it’s the most sure-fire way for a medical professional to confirm if it is indeed a Brown Recluse bite.
As soon as you notice the bite, clean it with soap and water before applying an antibiotic ointment. Afterwards, wrap some ice and use it to apply pressure to the bite. This will help alleviate pain and swelling. If the bite is located on any of your limbs, keep that limb elevated to reduce the flow of blood pressure to the bite.
There are usually several over-the-counter medications you can get at the local pharmacy. You can try taking common painkillers like acetaminophen, ibuprofen, or an antihistamine.

After doing all the immediate steps above, make sure to call a medical professional as soon as possible. You may also call the hotline of the National Poison Center (1-800-222-1222)
The fact that brown recluse spiders aren’t naturally aggressive may make it seem like you don’t need to control their numbers. The fact is though, it’s always better to be safe than sorry. Especially when there’s a chance of you or a family member getting bitten. But as long as you pay attention to the signs and consistently take steps to keep your home clean, you won’t have to worry about their numbers getting out of hand.
[/et_pb_text][/et_pb_column][/et_pb_row][/et_pb_section]