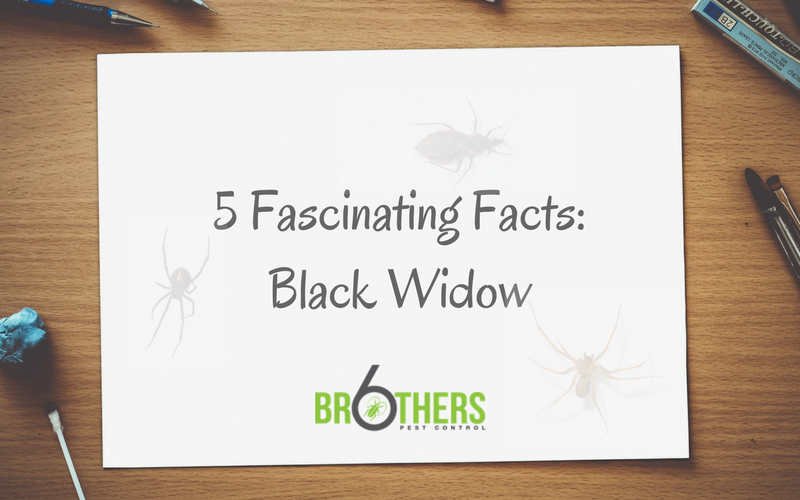 Perhaps the most feared of any North American spider is the black widow. Black widows are often the cause of concern and anxiety amongst home owners, but is that fear warranted? Here are five facts that might give you insight and appreciation for this fascinating creature. The name “black widow” came from the belief that the female spiders would eat their mates. These observations were made in laboratory conditions where the spiders were held in cages and had no way of escaping. In reality, female cannibalism rarely occurs in the wild among any of the three species of black widows that live in North America. Thus, most males live to mate again, and most females are not widows.

The black widow is the most venomous spider in North America. In fact, its venom is 15 times as toxic as a rattlesnake. Although it may be extremely toxic, black widows very seldom cause human deaths because the amount of venom injected is so extremely small. It is estimated that less than 1% of black widow bites result in mortality, and the danger is mostly relegated to the very young, very old, or sick. Not all black widows are even poisonous. Only the female black widow is a danger, while males and juveniles are harmless. If you are bitten by a black widow, you should seek medical attention, but chances are great that the bite will not cause any lasting problems.

The main food source of black widows are insects, including: ants, caterpillars, cockroaches, beetles, and more. Spiders are an important part of controlling the insect population naturally. After the prey has been caught in the web, the black widow will inject it with a digestive enzyme. This enzyme will soften and then liquify the body, allowing the spider to drink their food as a liquid.

Although they are highly feared, the likelihood of being bitten by a black widow is relatively small. Black widows are solitary creatures that are nocturnal and try to avoid being seen. They live in dark, secluded crevices or corners. In homes, they are most often found in basements or garages or amidst piles of clutter. They are not aggressive and will usually only bite if they are trapped. Bites typically occur when humans accidentally lean against them or bump them while doing things like cleaning, moving boxes, or decluttering.

5.  Black Widow Silk is Among the Strongest of Any Spider

Black widow cobwebs are not the most elegant of spider creations. They spin webs that lack any real shape or form. They have an erratic appearance and are rough and sticky to catch prey. That being said, widow silk is extremely strong, several times stronger than any other spider’s silk. This makes black widow silk extremely important to researchers who are hoping to use its properties to create new highly durable materials.

Hopefully, some of the anxiety about black widows has been eased and facts have been separated from myths. Regardless of this new knowledge though, most homeowners still do not want black widows in or around their homes. That’s where Six Brothers Pest Control can help. We have trained professionals working on our team whose main goal is to help homeowners feel calm and confident that their homes will be safe and pest free. If you are concerned about black widows are any other pests around your home, give us a call. We are your Kansas City Spider Control specialists.