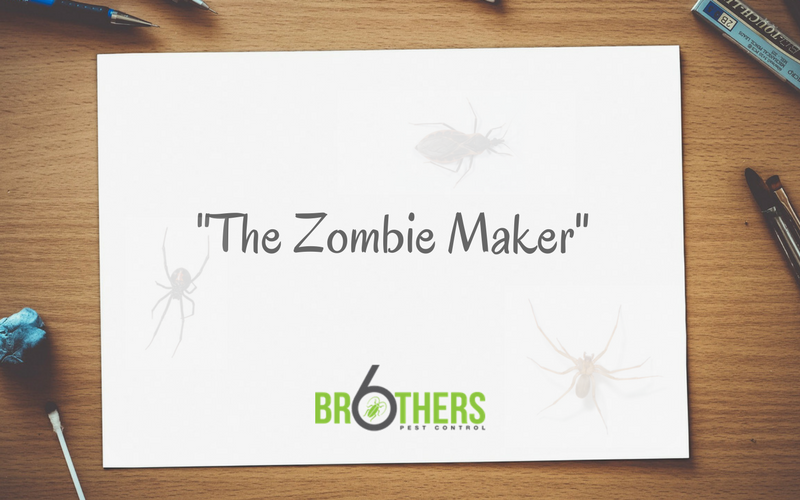 The emerald cockroach wasp is a parasite, and its unique relationship with a common household cockroach makes it one of the creepiest bugs around. Through a series of stings, the wasp essentially turns the cockroach into a zombie slave that will do its bidding. This zombie behavior even goes so far that it allows the wasp’s larva to eat it alive, organ by organ without attempting to flee. So, how is this zombie-making done?

The emerald wasp first stings the cockroach in its thoracic ganglion (nerve clusters of the thorax). The wasp secretes a substance that blocks transmission of motor signals between the nerves. This basically means that it briefly paralyzes the front legs of the cockroach so that it can’t escape while the wasp delivers a second dose of venom. The 2nd sting is aimed at a very specific spot in the cockroach’s brain that blocks its ability to initiate complex movement. This doesn’t mean that it can’t move, only that it can not make the decision to move on its own. Instead, it becomes a zombie and will move as directed by the emerald wasp.

*An Emerald wasp leading a zombie cockroach back to its burrow– Attribution: by JMGM; Wikimedia Commons

This zombie-making is fairly unique in the animal world. It is not a normal parasite-prey relationship because of the way the wasp is able to modify the cockroach’s behavior. The cockroach is much bigger than the wasp, so nature found a way to ensure that the emerald wasp could use the cockroach to reproduce. Amazing and terrifying!

Luckily, emerald wasps only target cockroaches, and they live in South Asia, Africa, and the Pacific Islands. So, put your mind at ease, there won’t be any zombie cockroaches in Kansas. That being said, we have plenty of regular cockroaches and other creepy-crawlies that live here. Whether it is ants or spiders, bed bugs or termites, or anything in between, Six Brothers Pest Control can help you take care of the pests that are bugging you. Give us a call today for an inspection and treatment plan. Happy Halloween!

*If you want to watch the emerald wasp in action, you can check out this zombie cockroach video !