Pest Control isn’t magic, but if it were, we’d be freaking Harry Potter!

For the residents of Spanish Fork, Utah, pest control is a serious matter. After all, a pest infestation can quickly grow out of control. An infestation not only makes a home uninhabitable, but it can also destroy its value. Moreover, infestations pose a serious health risk for humans and pests. That is why pest control is among the most important concerns for homeowners and tenants.

Spanish Fork is a stunningly scenic city located in the Provo-Orem metro area in Utah. It is renowned for its breathtaking landscapes. It is a go-to favorite for outdoor enthusiasts while providing residents an unparalleled quality of life. Its amazing spring and summer weather draws folks from all over the country every year. In Spanish Fork, wildlife also thrives including pests.

At Six Brothers, we believe in addressing infestations from the root. We know how important it is to protect both property and family. As such, we are committed to providing outstanding service that can address infestations once and for all.

What Is a Pest?

A pest is any type of living creature that is noxious to the well-being of people and animals. These creatures generally include insects and rodents. However, they may also include microorganisms, birds, and reptiles as these creatures spread disease through parasites and bacteria. As such, pests endanger food and water sources, thereby reducing residents’ quality of life.

Pests generally thrive in the wild. They are part of nature’s ecosystem balance. However, pests can make their way into homes. Once inside, pests can quickly reproduce. At that point, they may become a significant health concern for people and pets inside the property. In the worst of cases, pests can spread from property to property.

Depending on the severity of an infestation, a pest control specialist in the Spanish Fork, Utah would need to conduct an intervention. This treatment would address the causes of the infestation eliminating it for good.

Most pests are fairly common throughout the United States. However, there are pests that are specific to Spanish Fork, Utah given its geographical location and climate. Here is a breakdown of the most prevalent types of pests in Spanish Fork, Utah:

At Six Brothers, we are fully equipped to deal with the pests that affect the well-being of residents in Spanish Fork, Utah. We address the root cause of the infestation, thereby upholding our value guarantee. 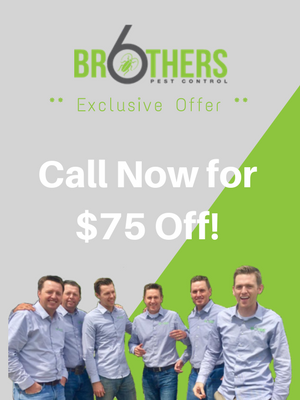 When there are signs of an infestation, calling a local pest control specialist is a must. A specialist can assess the type of pest and the extent of the presence. At Six Brothers, we assess the property to determine the degree of the infestation, and what we can do to eliminate it.

We start by writing a no-obligation estimate of the treatment needed for the property. We then proceed to detail the course of action we intend to take. We are prepared to answer all of our clients’ questions. We want nothing more than to ensure their peace of mind.

Then, we address the hotspots where the pest has nested. We use specialized chemicals and equipment designed to zap bugs, but which are perfectly safe for humans and pets. Our treatment is lethal to bugs but harmless to our clients.

Once treatment is done, we proceed to conduct follow-up inspections. These visits help us ensure that the job was successful. We don’t stop until the job is complete. We also recommend our clients contact a local licensed home inspector to spot any cracks and openings in which bugs may enter the home. That way, our clients can be certain no more bugs will be getting into their homes.

When to Contact a Pest Control Specialist in Spanish Fork, Utah

If you believe that a pest may be present in your home, contact a local pest control specialist right away. At Six Brothers, we are fully licensed and insured to handle anything that comes our way. We have the experience and the know-how our clients have come to expect. We are relentless in our pursuit of pests. Please contact us at 801-428-8389 or write at info@sixbrotherspestcontrol.com. One of our qualified pest control specialists will be ready to answer all of the questions you may have.